Alexandra Kennedy, MA is a psychotherapist in private practice since 1976 and author of Honoring Grief (New Harbinger, 2014), Losing a Parent (HarperCollins, 1991) and The Infinite Thread: Healing Relationships Beyond Loss (Beyond Words, April 2001), Offerings at the Edge (iUniverse 2007), and How Did I Miss All This Before? Waking Up to the Magic of Our Ordinary Lives (iUniverse, 2010). 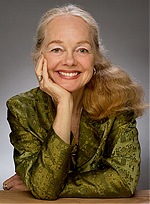 She was stunned by the power of her grief when her father was diagnosed with cancer in November 1988—even though she had been a psychotherapist for fourteen years and had attended death and dying workshops with Stephen Levine. Her father died three months later. She wrote Losing a Parent in the year following his death, sharing not only the story of her father's dying and her grieving but also the resources and strategies that helped her move through her grief while raising a family. Since then, she has devoted much of her therapy practice, teaching, and writing to grief. In 2001 The Infinite Thread was published, with an emphasis on healing relationships beyond loss, along with issues not commonly explored, such as the grief handed down through generations. Her book How Did I Miss All This Before?, an intimate account of courageous spiritual transformation in the midst of life's common challenges, is written for everyone wishing to find greater openness to life in each precious moment. Her most recent book, Honoring Grief, offers powerful and compassionate wisdom for working with grief and coping with loss. Simple and effective strategies and exercises are ideal for anyone suffering the emotional and physical effects of grief.

Alexandra lectures at universities, professional organizations and major conferences. Weaving together inspiring case histories, practical advice, and experiential exercises, she provides a unique perspective to grieving through her work with the imagination. She also offers lectures, workshops and seminars on facing loss as an opening to the sacred, the loss of a parent, healing relationships beyond loss, dreams as messengers of the night, women's spirituality, mid-life renewal, the power of the imagination, the empty nest, and related issues.

Alexandra has been interviewed in USA Today, the Monterey Herald, the San Jose Mercury News, the San Francisco Examiner, the Santa Cruz Sentinel, New Woman and the Boston Herald as well as on NPR's "Talk of the Nation," CNN's "Sonja Live", KQED's "Family Talk," CBC Radio Canada "Wellness Show", KDKA "Amplify", "Open to Hope Radio" and "New Dimensions Radio." She was an adjunct faculty member of John F Kennedy University, has been a faculty member of University of California Santa Cruz Extension, and taught a popular graduate level course on dying and grieving at the Institute of Transpersonal Psychology for eleven years. Her articles have appeared in Yoga Journal, Mothering Magazine, Magical Blend and the California Therapist. Her articles have been published Online at: innerself.com, groups.msm.com, learnwhatsup.com, beyondindigo.com, care-givers.com, wisdomseekers.org, among many others.

How Did I Miss All This Before?
Waking Up to the Magic of Our Ordinary Lives
iUniverse 2010

Offerings at the Edge
iUniverse 2007

The Infinite Thread: Healing Relationships Beyond Loss
Beyond Words Publishing May 2001
Chinese translation 2003